To equip economic decision-makers in…emerging countries with the tools of commercial success.

Businesses drive economic development and improve social welfare. They do this by producing products or services valued by customers above and beyond the cost of producing them. Profit- seeking firms that operate within the legal and ethical standards of their communities benefit society. And, since profits provide both the capital needed to grow and the incentive to grow, the magnitude of the social benefit correlates with the profitability of such businesses.

William Davidson (1922–2009), a successful global business leader and visionary, understood the value of profit-seeking firms. However, he also understood that business principles could be applied to organizations that were socially beneficial, but unlikely to be profitable. In light of this, Mr. Davidson established the William Davidson Institute (WDI) at the University of Michigan in 1992 with the mission “to equip economic decision makers in… emerging countries with the tools of commercial success.”

WDI continues to advance Mr. Davidson’s vision more than 25 years later. At WDI, we serve both profit-seeking and non-profit firms by creatively applying business skills in low- and middle-income countries (LMICs). We do this by a) conducting research and working with local partners to develop business models that are profitable in LMICs, and b) transferring business knowledge to decision makers operating in LMICs. We work with organizations focused on the education, energy, financial and healthcare sectors. We also offer management education programs, and measurement and evaluation services. 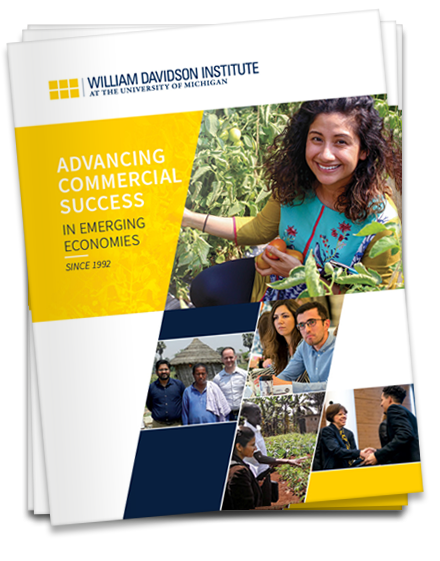 Learn more about who we are and what we do.
View the eBook Download the PDF

William Davidson, an innovative business leader and distinguished philanthropist, founded the nonprofit William Davidson Institute at the University of Michigan in 1992. Davidson led Guardian Industries Corporation, an international manufacturer of glass products headquartered in Auburn Hills, Michigan as Chairman, President and CEO. After the fall of the Berlin Wall and the collapse of Soviet-era communism, Davidson, a U-M alumnus, partnered with the University to create the Institute at a time of incredible global economic transformation.

Davidson became the managing partner of the Detroit Pistons in 1974 and was the majority owner of Palace Sports and Entertainment. He was one of Michigan’s most notable philanthropists, responsible for more than $200 million in donations to local and international charities and universities. He donated $30 million to create the William Davidson Institute.

A native of Detroit, Michigan, Davidson received his undergraduate degree in Business Administration from the University of Michigan in 1947 and his Juris Doctor degree from Wayne State University in 1949.

Click here to see how WDI, its U-M partners, and other global stakeholders commemorated Davidson and his vision in 2017 to celebrate the Institute’s 25th anniversary. Learn more about Davidson’s life and accomplishments in the below video.