Entrepreneurship as a Tool for Peace

The WDI Global Impact Speaker Series in March featured the man who established and ran the U.S. State Department’s Global Entrepreneurship Program (GEP), a main tenet of President Barack Obama’s strategy to improve relations between the U.S. and Muslim countries.

Steven Koltai, who served as the senior advisor of GEP from 2009-11, spoke March 14 at the University of Michigan’s Ross School of Business. 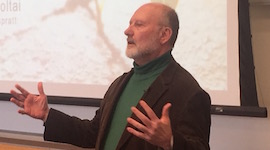 Koltai is currently a guest scholar at the Brookings Institution and serves as managing director of Koltai & Co., which looks to build a global entrepreneurship ecosystem. He has more than 30 years of business and entrepreneurship experience, including co-founding Coronet Television Satellite Company (now SES), the world’s largest commercial TV satellite system.

He also has been senior vice president for Strategy and Corporate Development at Warner Bros., a strategic planning consultant at McKinsey & Co., and an investment banker at Salomon Brothers. Koltai is the author of the recent book Peace through Entrepreneurship: Investing in a Startup Culture for Security and Development (Brookings Press, 2016) and writes and speaks frequently about entrepreneurship as a foreign policy tool.

His March talk was the second time Koltai has visited WDI. In 2011, he was the featured speaker at WDI’s Global Summit on Educating Entrepreneurs, an international gathering of development organizations, government agencies, entrepreneurship trainers, microlenders and academics.