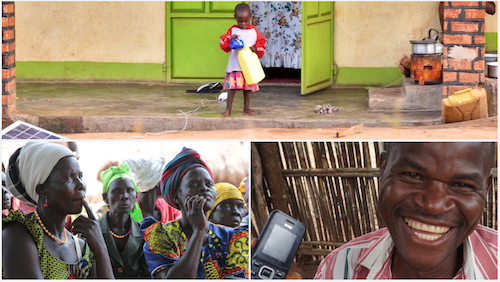 Images illustrating the most influential articles on NextBillion in 2017.

In recent years, the off-grid energy business has been one of the hottest industries in low-income economies, particularly in East Africa. But a post written by an impact investing fund explaining why it was backing off investments in the sector after being active in the space was voted by NextBillion readers as the most influential article of 2017. NextBillion is an affiliate site of WDI.

Written by three principals from venture capital firm Ceniarth, the authors aired concerns about the solar home system industry’s “hype cycle” that touched off a year-long debate on NextBillion. The post garnered slightly more than 25 percent of the readers’ votes, edging out a post on a potential new, outcome-based solution to funding and scaling poverty alleviation approaches. The third place post made the case that pushing technology for financial inclusion projects for smallholder farmers often is more harmful than helpful.

For the past six years, NextBillion editors have asked readers in December to vote on which of the 12 most-read articles by month were the most influential of the year. The votes were tallied and the winners were announced on NextBillion on Jan. 3.

NextBillion, which is managed by WDI, is one of the largest online platforms for views, jobs, events and news around business and investment solutions to poverty. Summaries of each post, written by NextBillion editors, as well as links to the winning posts can be found below.

FIRST PLACE (25 PERCENT OF THE VOTE)

Ceniarth, an impact investment group, had been fairly active in the energy access sector for at least three years. But in 2017, the three principals with the firm – Greg Neichin, Diane Isenberg and Mary Roach (now at Loowatt), explained why they were stepping back from off-grid energy venture capital investments in emerging markets. Their concerns about the solar home system sector touched off the longest-running debate this year on NextBillion, as several sector investors echoed their concerns, while others, including some entrepreneurs, rebutted them.

Key quote: “… it is not easy for most investors to publicly acknowledge concerns about sectors where they have made financial commitments. It poses a risk to the capital that they have already extended in the market. As we maintain current financial exposure to the solar home system sector, it would be economically rational for us to keep our heads down quietly.

As a mission-oriented firm, however, we felt it was important to transparently share our insights even if they are in conflict with our financial interests. We will continue to try to live up to this promise as we work collaboratively to fund solutions that deliver critical and sustainable improvements in rural livelihoods.”

A Milestone in Innovative Finance: Exploring the First-Ever Outcome-Based DIB for Poverty Alleviation in Africa

The graduation approach is a promising solution to poverty, with proven results. But it’s difficult to scale, and traditional funding models lack the flexibility and performance incentives to drive its impact, since funding is typically tied to activities rather than outcomes. Dianne Calvi, president and CEO of the NGO Village Enterprise, discusses an intriguing new solution: the US $5.26 million Village Enterprise Development Impact Bond (DIB), which she calls “the first-ever outcome-based development impact bond” focused on poverty alleviation in Africa. Can it provide a model for future funding of anti-poverty programs?

Key quote: “Critics of impact bonds have noted that their set-up costs are high and their scale is limited. We believe this has mainly been because previous approaches have insufficiently leveraged true market forces, and instead have relied on a central and over-engineered approach. We believe that if donors come together to commit significant outcome funds and specify clear and realistic conditions for a provider to earn payments, capable service providers will have the incentive to build capabilities to mobilize the necessary working capital and negotiate terms with investors.”

If each and every one of the approximately 500 million farmers who feed about 2 billion people received a mobile phone tomorrow, it might not improve their lives. For many who have to navigate spotty networks, unreliable apps and various levels of financial literacy, a mobile phone can be more burden than blessing. Alexandra Fiorillo, the founder and principal at GRID Impact, explained why financial inclusion projects need to avoid pushing technology for its own sake.

Key quote: “Although the benefits of mobile money are frequently touted, it isn’t always the best solution. In fact, research shows that many people save more and spend less when handling physical cash. … Instead of pushing technology for technology’s sake, financial inclusion projects ought to seek diverse solutions that are appropriate and accessible for customers based on their needs – which may mean providing a choice of cash modality (e.g. hard cash, mobile money and card-based solutions).”