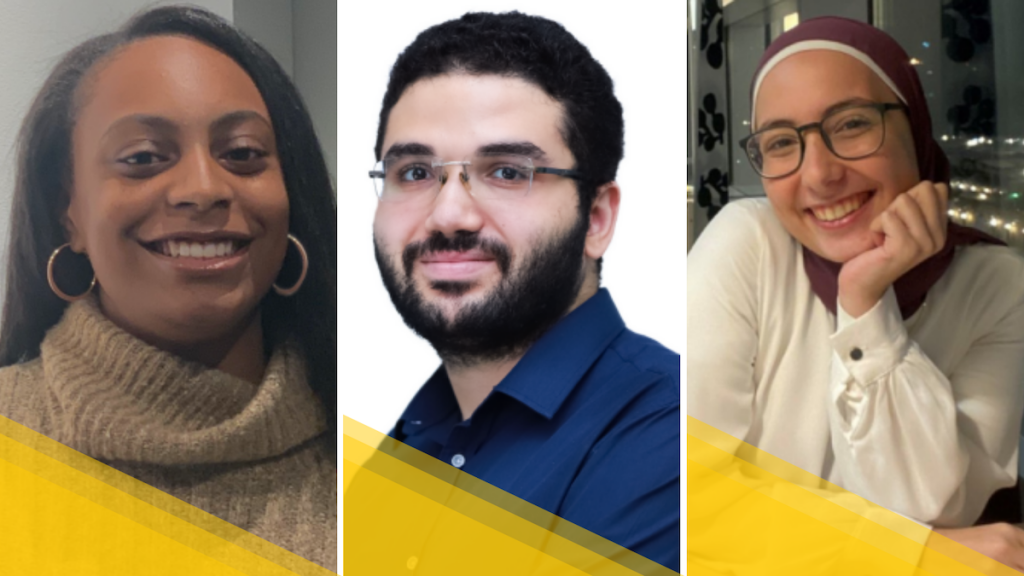 Three student alums of international virtual exchanges managed by the William Davidson Institute at the University of Michigan (WDI) have been invited to join an inaugural fellowship launched by the Stevens Initiative, the supporting partner of the programs.

The Stevens Initiative selected at total five fellows from the U.S. and nine fellows from the Middle East and North Africa (MENA) region for the inaugural 2022 Stevens Initiative Alumni Fellowship cohort. The organization described the fellowships as an “immersive learning opportunity for young professionals,” all of whom have completed a Stevens Initiative-funded virtual exchange with distinction. The program will include monthly synchronous and asynchronous activities, and individual coaching sessions, culminating at an in-person summit in Washington D.C. at the beginning of 2023.

“Through this fellowship, alumni will develop personally and professionally as global leaders, intercultural communicators, and cross-cultural collaborators while forming long-lasting relationships with their peers and the Initiative,” the organization stated. Learn more about the program and the other fellows here.

WDI has managed two programs funded by the Stevens Initiative: The MENA-Michigan Initiative for Global Action Through Entrepreneurship (M²GATE) and Business & Culture, a virtual practicum now in its third semester at the Ross School of Business at U-M.

The WDI-affiliated student fellows are Whitney Brooks, a U-M undergraduate student and 2021 alumna of Business & Culture; Mohamed Hassan, who was a winning team member in the M²GATE Pitch Competition in 2018; and Nouha Ziade, a 2020 B&C alumna, who is now an elementary teacher at the American Creativity Academy in Kuwait.

“We are so proud of our three WDI virtual exchange alums, Mohammed, Nouha and Whitney,” said Amy Gillett, Vice President-Education at WDI “They demonstrated leadership as participants in our programs and now have a great opportunity through this fellowship to continue to develop their skills as leaders and cross-cultural collaborators. They’ll also learn some new ways to promote virtual exchange in their own communities, helping to forge more invaluable global connections.”

From 2017-2019, the M²GATE program brought together more than 400 students from five Michigan university campuses and their peers in Egypt, Libya, Morocco and Tunisia. Harnessing the power of virtual exchange, the students worked in teams to find entrepreneurial solutions to social challenges in the MENA region, while learning new skills, building cross cultural experiences and forging new relationships. The program culminated in a visit by the winning teams to Ann Arbor to participate in a week of entrepreneurial activities, including a business pitch competition in November 2018.

Business & Culture is an action-based learning course on international business cultures connecting U-M undergraduate students with peers from Egypt, Lebanon and Libya. More than 400 students from American University in Cairo and the American University of Beirut, and students in Benghazi Libya, and U-M have participated in the course to date.

The WDI-organized programs represent a strong point in a broader global network of virtual exchange projects supported by the Stevens Initiative. Through its 86 grants around the world, the Stevens Initiative will reach nearly 75,000 young people by 2023 as part of its vision of giving every young person the knowledge, skills and experiences they need to prosper in an increasingly interconnected world.

In addition to pursuing a Bachelor of Fine Arts in Art and Design, Brooks has worked as a marketing and media intern at the Zell Lurie Institute at Michigan Ross, supporting its long-term brand identity goal by creating digital graphic assets. Brooks, who hails from Detroit, has an interest in product/industrial design that encourages thoughtful decisions.

Hassan is a senior undergraduate student at the American University in Cairo, where he is majoring in Engineering with minors in Economics and Sociology. He is currently an Associate Coach at The Center for Learning and Teaching at his university, where he works on designing and facilitating professional development workshops to expose students to design thinking. Hassan is from Egypt and has a passion for outdoor “nature-based: activities, adventure sports, personal development, volunteering, traveling, watching movies, and reading novels of nonfiction, culture and romance.

Ziade, originally from Tripoli, Lebanon, is an elementary teacher at the American Creativity Academy in Kuwait, where she teaches homeroom subjects for third grade students. Previously, she worked as an ambassador for Localized World in Lebanon. She also participated in the Alumni Review Committee for the Stevens Initiative 2020 Virtual Exchange Grant Competition. Ziade has a dual degree in Business Administration and Elementary Education with a Teaching Diploma from the American University of Beirut and is currently studying for a bachelor’s degree in Data Science at the Lebanese University. Her interests include traveling, culture, film and archery.

At the William Davidson Institute at the University of Michigan, unlocking the power of business to provide lasting economic and social prosperity in low- and middle-income countries (LMICs) is in our DNA. We gather the data, develop new models, test concepts and collaborate with partners to find real solutions that lead to new opportunities. This is what we mean by Solving for Business – our calling since the Institute was first founded as an independent nonprofit educational organization in 1992. We believe societies that empower individuals with the tools and skills to excel in business, in turn generate both economic growth and social freedom – or the agency necessary for people to thrive.