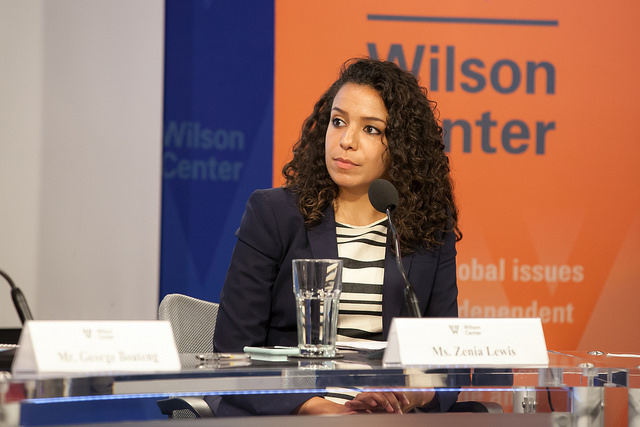 Zenia Lewis speaking on a panel at the Wilson Center on Africa.

Zenia Lewis’ 2008 summer internship in Malawi was supposed to be an opportunity for her to build upon what she had learned during her first year of a master’s degree in public policy from U-M’s Ford School, acquire a few new skills, and also experience working in a different cultural setting.

As expected, Lewis left Malawi 12 weeks later with several semesters worth of lessons. They just weren’t the ones she was anticipating.

As part of WDI’s Global Impact Summer Internships, Lewis arranged to spend three months working for the Malawi Rural Finance Co. The MRFC, for short, helps poor farmers and other small scale entrepreneurs by providing new kinds of access to savings and credit. It had intended to launch a new savings product to a group of interested farmers.

Lewis and others at MRFC planned to gather and analyze data on the individuals who opened these accounts, including well-being indicators such as income, health, and child education to measure the positive effects of the company’s work. They also had plans to roll out new biometric identification software, a modern-day credit bureau for tracking creditworthiness of clients who often lack official credentials and therefore are unable to secure loans or must pay higher interest rates to get one.

It all looked good on paper, but the roadblocks and challenges for Lewis started almost as soon as she arrived in the capital city of Lilongwe. First, many of the farmers who were supposed to participate in the new savings product backed out at the last moment due to a variety of cultural concerns. Then, delivery of the new software and hardware was delayed. 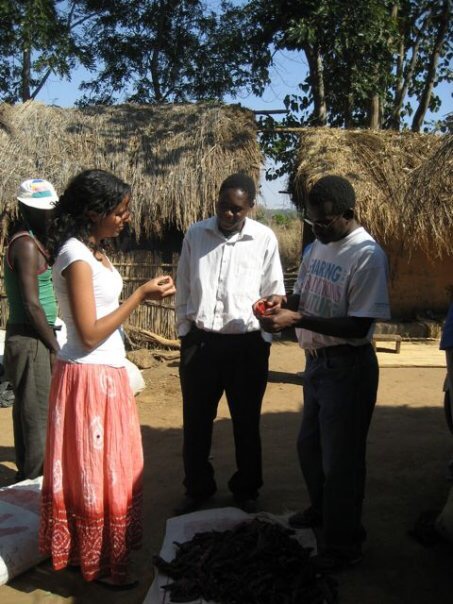 Lewis speaks with a paprika farmer in Malawi during her internship.

On top of those issues, MFRC’s offices had frequent power and internet outages as well as an insufficient number of computers, all of which stunted productivity. Lewis turned all of the issues into lessons.

“Learning early on that things can go completely awry in the field and take much longer than anticipated…was probably one of the most useful things I could learn for understanding the work I would do later in my career,” Lewis said. “It also taught me to be innovative, and to come up with new plans and solutions.

“It all served as a valuable lesson for later when doing research and working with partners in Africa because I understood firsthand many of the challenges they faced.”

Lewis adapted to her surroundings and circumstances. She took advantage of the delays and power outages to conduct face-to-face interviews with government officials and high-level individuals in the banking sector on how to improve microfinance policy and the feasibility of establishing a microfinance credit bureau in the country. She also went on field trips to more remote parts of Malawi to help improve loan collection and meet different small-business clients.

Along with the professional lessons, there were some personal enlightenments as well. For one, she discovered she didn’t like to be idle. So she began writing a blog, charging her laptop when the power was on and writing when there was a power outage.

“I learned that I actually enjoy adapting to new environments,” Lewis said. “I like challenging work situations that involve creatively coming up with solutions and I enjoy getting to know new cultures.”

Lewis took all her new wisdom into her professional career after graduation.

She began working for the Brookings Institution in Washington, D.C. and its Global Economy Program’s Africa Growth Initiative. She initially applied for a job there focused on Latin America, but the position had been filled. But when Brookings saw her experience in Malawi, it offered her a position with the Africa initiative. Lewis joined as a research analyst involved in a range of topics from political and governance issues to natural resource management – especially oil and gas – to trade and regional integration. She traveled to Ethiopia and Zambia for annual U.S.-Africa economic forums, and also worked on a project focused on the effects of oil and gas discoveries on local communities in Uganda.

Lewis left Brookings after nearly four years to move to Tunisia and work for the African Development Bank (AfDB) on a trade finance project that supported African banks lending to local small- and medium-sized enterprises that traded internationally. While there, she soon learned of  a new position at AfDB in Washington working with the African Union and African ambassadors on engaging with the U.S. government on African development policy-related issues. She took the job and worked on several projects for about two years before leaving to volunteer in Lebanon assisting Syrian refugees.

Recently, Lewis got married and moved with her husband to Vienna. She is working on various consulting projects focused on African development issues, and is looking for a full-time position.

Wherever she lands, Lewis said she will bring with her the lessons learned from her summer in Malawi. She said she has often reflected on the challenges and hardships she endured during her internship whenever encountering tough times in her professional work.

“There have been some times when I’ve had to travel for work and experienced one chaotic thing after another and thought back to some of the challenges of that summer internship and reminded myself that it’s manageable and all will be fine,” Lewis said. “Also, when projects have had different roadblocks or not gone as planned, it’s been useful to think back and know that what can seem like a setback can actually be another opportunity or reveal useful insights for better implementing the project.” 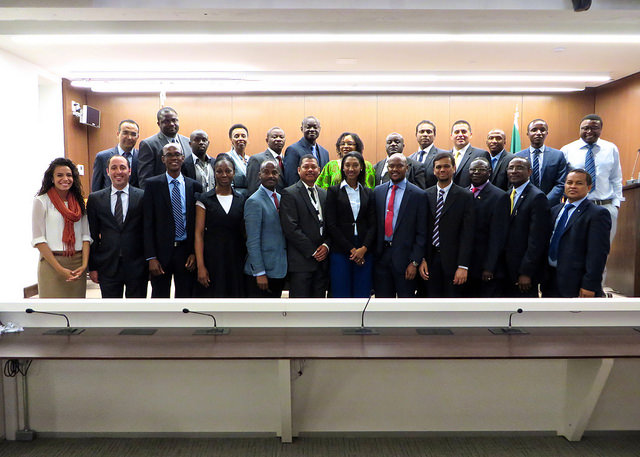 Lewis, far left, with officials from African embassies who attended a trade & investment session in Washington, D.C. organized by Lewis when she worked for the African Union.