WDI Alum: How a Career in China’s Energy Sector Began Over Tea

Rob Liou’s goal after he received his MBA from the University of Michigan’s Ross School of Business in 2011 was to work in China’s energy sector. Liou was an auditor at a large accounting firm in San Francisco before graduate school but didn’t have a passion for it nor was he interested in the dominant industries in the Bay Area such as tech, biotech and retail.

His career path would first take him to one of the poorest regions in China – Guizhou – where he’d find himself steeped in the tea trade with smallholder farmers.

While researching Ross, Liou learned about WDI and its summer internships, visited the Institute during a campus tour, and met members of the business school’s Emerging Markets Club, some of whom were past WDI interns.

“Being involved with WDI is something I definitely wrote about in my application to U-M,” Liou said.

When he started thinking about a summer internship after his first year of MBA studies, Liou approached WDI with an idea for a project. Most of WDI’s summer internship projects are developed by the Institute along with its partners. But WDI also allows graduate students to formulate their own internship projects based on their educational, personal, and career interests as long as it falls within one of the Institute’s research focus areas. For these “student-initiated” internships, the student contacts the organization and works with senior managers there to define the scope of work for a 12-week project. The student then presents the proposal to WDI for potential funding.

To see if he would like working in China, Liou developed a project to help organic tea farmers in in Guizhou to create a marketing strategy to export their tea to more lucrative foreign markets, such as the U.S. Some of the farmers were part of a company while others worked independently and sold their tea directly to a company. One of Liou’s goal was to get the farmers and companies form larger co-operatives. (Read the blog posts Liou wrote while on his internship here.)

“Despite spending all of my life in the United States, my goal since visiting China in college has been to move there,” Liou said. “The internship with WDI was very instrumental as I had no significant overseas work experience prior to Ross, and my Chinese language skills were weak. I’m very thankful that WDI allowed me to design the internship and provide this opportunity.” 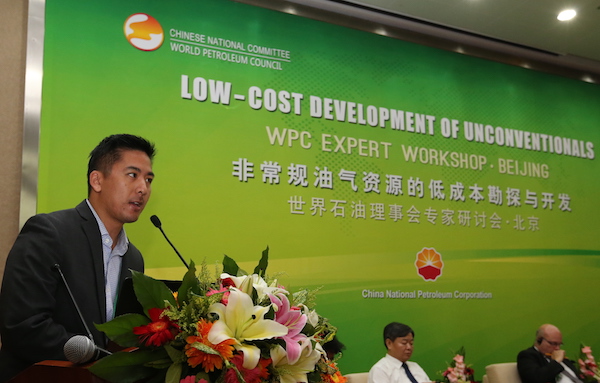 Rob Liou in a recent photo.

Liou worked with two graduate students and a professor from Guizhou University. The foursome traveled through the province extensively to visit farmers and sites where the tea was made. While there, Liou met a local husband and wife who provided funding to help the farmers market their tea.

“They weren’t really doing this for money, they just really wanted to make life better for the local farmers,” he said. “We wanted to help him because he and his wife were such sincere, caring, and passionate people. I feel like a lot of the best people I’ve met in China tend to typify those traits – very sincere, hard-working, and not necessarily after money.

“It made me want to come back after graduation, and it’s really what’s kept me here for the past six years.”

Liou’s hard work paid off. Two years after his internship, he was contacted by a U.S.-based tea importer who had seen an article about Liou’s internship on the WDI website and was interested in buying tea from the farmers. Liou put him in touch with the people running the tea company in Guizhou.

After Liou graduated from Ross, he went to work at China’s second-largest oilfield for a former state-owned enterprise. He began making contacts and learning about the industry. Later, he collaborated with some Houston-based Ross alumni who had started PacWest Consulting Partners, which provided research and consulting services with a focus on the global unconventional oil and gas industry. China is home to some of the world’s largest reserves of untapped shale natural gas.

“Using my network and their brains, we were able to scale up our presence here in Beijing quickly,” Liou said.

The firm was acquired in late 2014 by IHS, and Liou joined the company, working with local and global clients engaged in exploration and production activities.

Liou said the internship taught him a lot, lessons that stay with him still and provide daily inspiration. He recalled during his internship accompanying a friend who was studying energy trends in Guiyang, the province’s capital city, for her doctorate at Colorado State University. To help villagers accept Liou’s friend and make her research interviews easier, the two agreed to perform in a local singing festival. Dressed in native garb and wearing makeup, Liou and his friend sang a traditional Chinese song called “Jasmine Flower” in front of thousands of locals.

“It was hilarious, but it’s something I always reflect on because it taught me the importance of localizing in order to develop ‘guanxi,’ or relationships, and not being afraid to get myself out there and try new things,” he said.

As Liou continues to advance his career in China, he said he won’t forget what he learned while a WDI summer intern working overseas for the first time.

“How important it is to be humble,” he said. “To be passionate about what I do, and also to have good local language ability, people skills, and cultural adaptability in order to be effective in a foreign land.”