After graduating from the University of Texas, Patrick Huang began  his career as a management consultant while giving free advice to social entrepreneurs in emerging markets. But he soon wanted to do much more than dole out advice on the side, so Huang decided to get his MBA and join a social impact enterprise in an emerging market.

The Ross School of Business at the University of Michigan was at the top of Huang’s list of graduate schools, and “WDI was one of the key reasons,” he said.

He enrolled at Michigan Ross in fall 2011 and that winter took part in a WDI-sponsored Multidisciplinary Action Project (MAP), an action-based learning course in which students work for a company or organization on a special task.

He was part of a four-person team working for the nonprofit charity CARE in Bangladesh, which was tasked with developing a micro-franchise pilot for small-scale businesses that sell agricultural inputs such as seed and medicine for livestock. The business plan included consolidation and coordination to improve efficiencies at the companies.

The team worked in a small farming town a few hours outside the capital of Dhaka. They often sat in huts and interviewed farmers and business owners.

“Although our team and our interviewees came from different sides of the world, we found common ground as we came to understand their challenges, their struggles, and most importantly, their ambitions for a better life,” Huang said.

That summer, he traveled to Mumbai, India as a WDI intern working for Village Capital, a peer-led business accelerator and investment program for early-stage social enterprises. Village Capital was planning to start two business accelerator programs, one focused on enterprises based in Mumbai and another sector-specific program for enterprises across India. Huang’s job was to recruit  interested and qualified social enterprises across India​ to the program. 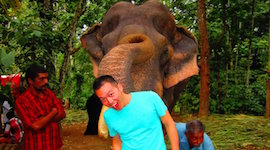 Huang poses with an elephant during his internship in India.

Huang soon discovered he not only had a knack for identifying potential businesses, he enjoyed it. He met with budding business owners, angel investors, and entrepreneur associations. He would meet them for coffee at a local cafe or for drinks during happy hour. He learned about each enterprise’s team, its business model and plans for growth.

“At the same time, I also learned about the city, the people, the culture,” he said. “I traveled across India from historical sights like the Taj Mahal to tea plantations in Kerala, absorbing and trying as much as I could. I sought to not only identify prospective businesses but also ​refine my own interests.”

By summer’s end, Huang had conducted preliminary due diligence and created a pipeline of 45 prospective early-stage, social enterprises.

“More importantly, I knew that I wanted to work in this environment where the growth of the entire country was almost tangible,” he said.

After graduating in 2013, Huang moved to Nairobi to work as a consultant for small- and medium-sized enterprises (SMEs). He now is chief of staff and principal business development officer at Umati Capital, a financial technology startup that provides financing alternatives for SMEs in  agri-business, retail suppliers and consumer goods manufacturers in East Africa.

He said his WDI internship and MAP experiences “refined and strengthened my current passion for entrepreneurship as the driver for economic growth in emerging markets.” He also identified his role in this field – finding areas of collaboration and opportunity.

But to accomplish this with prospective clients in Kenya, he thought back to what he learned during those meetings over coffee in Mumbai and the interviews with farmers in their huts in Bangladesh. What made those projects succeed was Huang’s humility and empathy​ when interacting with people from a different culture or background. He also practiced “active listening” to show he was attentive and striving to understand. These are traits he applies in his work today.

“Only by understanding these lessons could I identify the common ground that served as our foundation to work together and achieve a common goal,” he said. “With my Ross MBA and my experiences at WDI, I am grateful for that opportunity, and look forward to working with businesses that can generate value for both the shareholders and the society as a whole.”