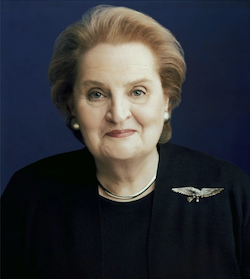 The Board of Directors of the William Davidson Institute (WDI) unanimously passed a resolution honoring Madeleine Albright, the first female Secretary of State who died in March.

In 2001, former Secretary Albright was appointed the first Distinguished Scholar at WDI and visited the U-M campus several times. Albright served as U.S. Secretary of State from 1997 to 2001, the highest-ranking woman in the history of the U.S. government at the time.

President Joe Biden will eulogize Albright at her funeral, set for April 27 at the Washington National Cathedral in Washington, D.C.

The resolution adopted by the WDI Board of Directors on April 25, 2022 reads:

Whereas, in 2001, Madeleine Albright, former U.S. Secretary of State, became the first Distinguished Scholar at the William Davidson Institute.

Whereas, Madeleine Albright remained deeply committed to education and the importance of engaging each generation in the major issues and challenges of the time.

Whereas, Madeleine Albright willingly shared with students and faculty her views on ways to advance internationally the goals of democracy, human rights, and social equity.

Whereas, Madeleine Albright embraced the mission of the William Davidson Institute, serving as an engaging and inspirational speaker who skillfully conveyed the challenges she faced as a woman operating at the highest levels of diplomacy.

Now therefore be it resolved, that the Board of Directors of the William Davidson Institute hereby expresses its earnest gratitude to Madeleine Albright for her distinguished service.

Further resolved, that the Board of Directors expresses its heartfelt condolences to the Albright Family for the loss of a truly distinguished and respected leader.

Further resolved, that a copy of this resolution be presented to the Albright Family as a token of our respect and appreciation.