Bakulu Power is a young company focused on building a renewable energy “mini grid” for residents of Lubya Island in Uganda’s Lake Victoria. The company has promising technology, has completed fund-raising rounds, has garnered interest from customers and has the support of the Ugandan government. But Bakulu Power still has a big challenge: When its mini grid is constructed, how can the company build additional demand for electricity?

Eight teams of University of Michigan students worked furiously to answer that question in WDI’s first-ever 24-Hour Case Competition, held last week at the Institute. The teams had just 24 hours to research the company, the island and its would-be customers, and prepare a compelling solution or series of solutions, to Bakulu Power’s quandary.

Vital to the competition was the fact that all solutions had to generate sustainable profits, rather than relying on grants or government funding, to operate the mini grid. The competition also challenged students to consider risks associated with new strategies and what partnerships might be required to carry out their solutions.

As she explained the challenge to students, Lucia Bakulumpagi-Wamala, CEO of Bakulu Power, noted the Ugandan government has set a goal of providing energy access to the entire country in the next ten years. Some 40% of the new electricity connections in Sub-Saharan Africa will be provided through mini grids in the next decade, she said. The sparsely populated Lubya Island has about 1,200 energy connections, but according to a survey of island residents 45% have no energy access and 70% are dissatisfied with their current energy sources.

The company, which will begin construction on its solar-enabled mini grid in the third quarter of this year, has explored other productive uses for renewable energy, including ice production. But in describing the challenge, Bakulumpagi-Wamala explained the importance of bringing in outside points of view.

“When you’re really close to something you can miss something very obvious … (Students) can look at this from a fresh perspective,” Bakulumpagi-Wamala told the competing students. “I think it’s important that the teams had such a short time frame because that’s really how this kind of work actually works. There are so many things that can change … you have to learn how to think really quickly.”

After Bakulumpagi-Wamala detailed the challenge, student teams immediately hunkered down in WDI conference rooms to start their research and begin formulating proposals. Most worked through the night and returned the next morning ready to explain business models in polished presentations.

In their 15-minute presentations, students showcased a wide variety of solutions, many of which looked to harness the dominant industry on the island: fishing. Students presented a variety of solutions, including developing new fish processing plants, or using power loads to refine plastic from discarded fishing nets into new products. Other teams explored solutions such as building up grain milling operations or creating a mixed use community/industry center.

Bakulumpagi-Wamala, WDI President Paul Clyde and Mike Kosonog, a partner in the Deloitte & Touche LLP Audit and Enterprise Risk Services group, all served as judges in the competition. 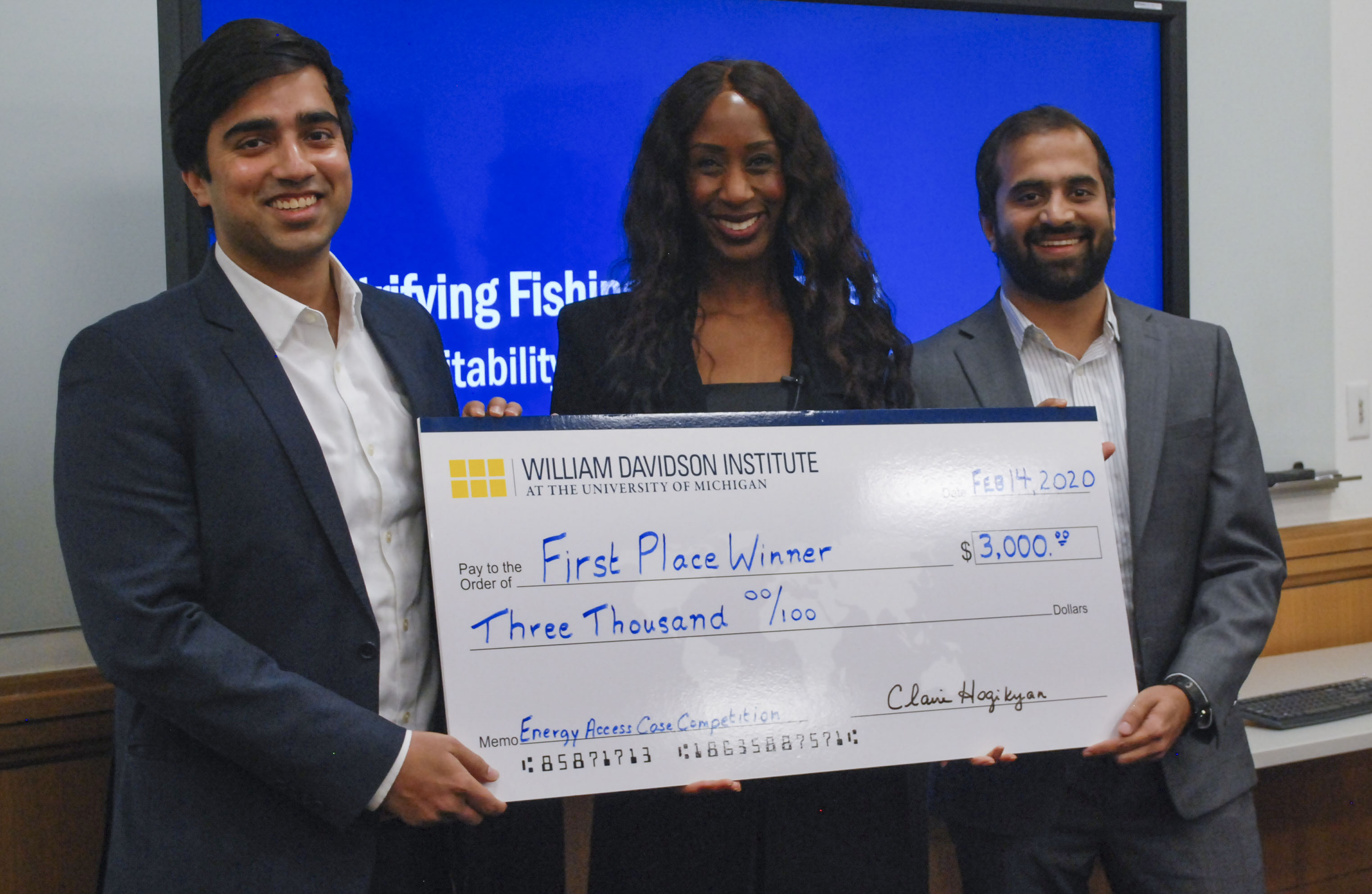 Maneel Grover and Avinav Sinha (pictured right and left, with Bakulumpagi-Wamala at center), both MBA students graduating in 2020 and both originally from Delhi, India, took first place. Their winning solution focused on equipping fishing boats with electric motors and helping to develop the businesses necessary to service those craft. The team made the case that electrification would ultimately save the local fishing industry money compared with using diesel. 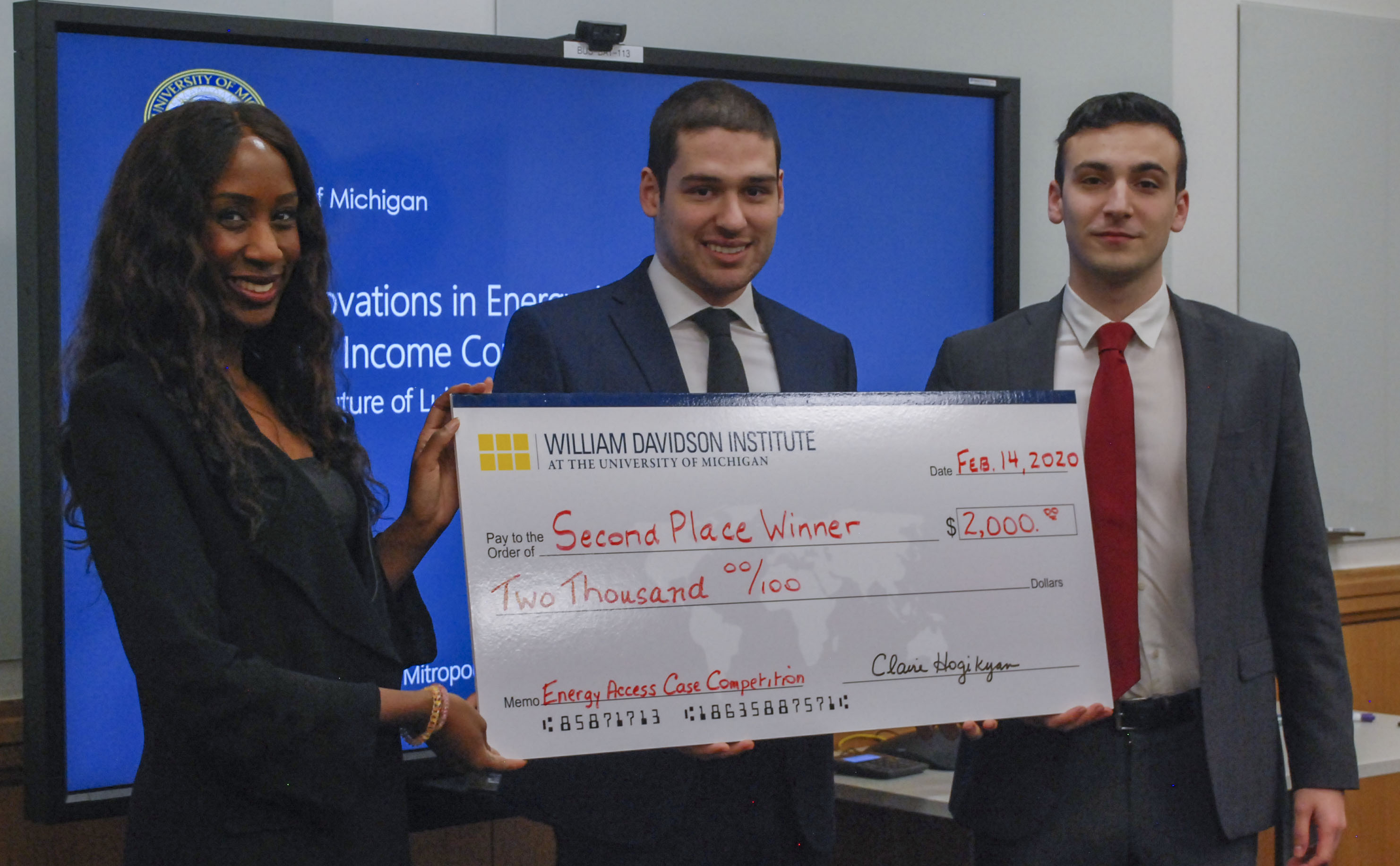 Coming in second place was the team of Gerasimos Dedes and S. Aris Mitropoulos, both majoring in engineering at U-M. The team presented ways to use energy to expand fish processing facilities and recycling discarded fish nets into other goods. 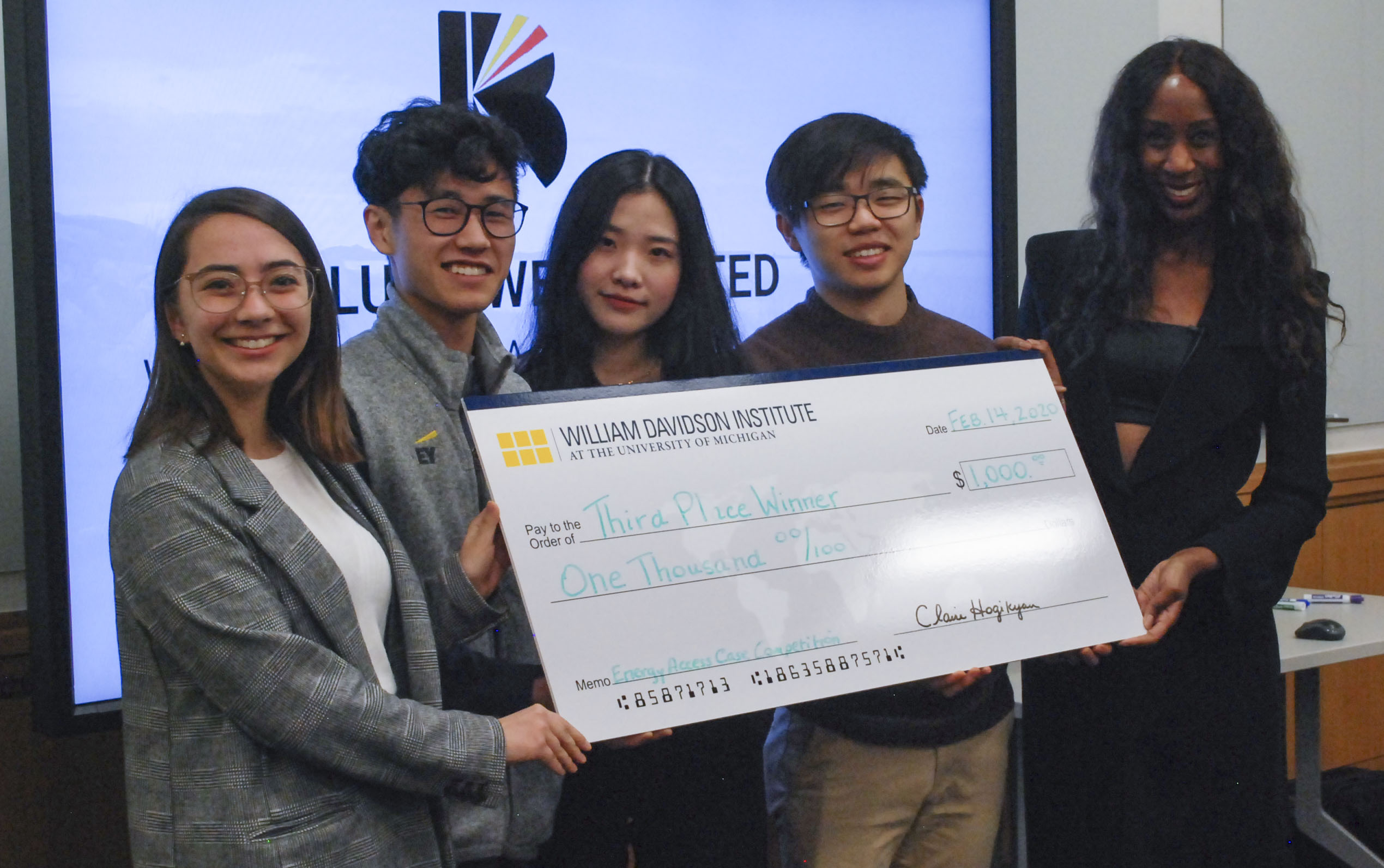 Bakulumpagi-Wamala said she was overwhelmed by the students’ questions, their presentations and the energy they brought to the competition.

“Twenty-four hours later, I cannot believe the level of detail in the research the students did and I think I actually learned more than they did,” she said. “This challenge has been incredibly timely, we still have time to make adjustments and deploy some of the ideas we heard.”

Bakulumpagi-Wamala said several of the ideas presented by the teams had previously been discussed by Bakulu Power’s management team. In fact, the winning team’s concept of electrifying boats had been introduced by one of her colleagues not long ago.

“Based on my experience with this 24-hour challenge, working with the students, the Michigan Ross faculty and the team at WDI, I would strongly recommend it to any business,” Bakulumpagi-Wamala said. “The more great minds you can bring to the table, the more solutions you can deploy.”

Clyde noted that the idea for hosting the competition came from one of this year’s Davidson Field Scholars, students who have conducted multiple projects with WDI.

“The student teams came from different schools across the university, representing a wide breadth of experiences and a depth of expertise – and they came up with a wide array of potential business models for this Ugandan business to try,” Clyde said.

Clyde also said WDI is interested in hosting similar competitions in the years to come.

“This competition drew upon the strengths of the Institute in a way that is clearly in line with our mission to equip decision makers with tools that will allow them to succeed commercially,” he said. “This event also provided a blueprint for future case competitions, in which we are able to engage students with some of WDI’s partner organizations in addressing their business challenges in a live setting.”