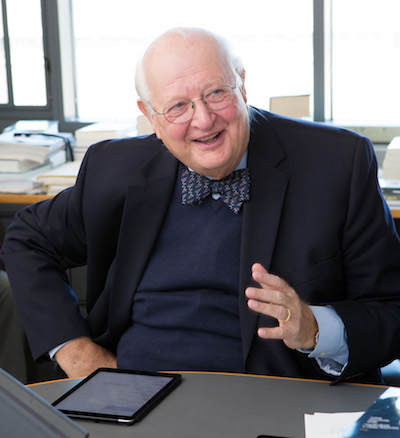 The William Davidson Institute at the University of Michigan will host an Oct. 5 talk and discussion with Sir Angus Deaton, a Nobel Prize-winning economist whose work has changed how many think about both global wealth and poverty.

The event, which is free and open to the public, will take place at 4 p.m. in Robertson Auditorium at U-M’s Ross School of Business. A panel discussion will follow Deaton’s talk, which is titled “What Should We Do About Global Poverty?” The event is part of WDI’s year-long celebration of its 25th anniversary. The panel discussion will include Renuka Gadde, vice president-Global Health at Becton Dickinson; David Lam, research professor at the U-M Institute for Social Research; and Jan Svejnar, professor of Global Political Economy and director of the Center on Global Economic Governance at Columbia University.

He received the Nobel prize in 2015 for his research into how the consumption of goods and services plays a critical role in human welfare. In 2016, Deaton, a native of Scotland, was knighted by Queen Elizabeth II for his service in the fields of economics and international affairs.

Perhaps the best summary of his work on economic health and development is his 2013 book, The Great Escape: Health, Wealth, and the Origins of Inequality. The book carefully documents the remarkable progress in income and health that has taken place, especially over the past 50 years. Despite large-scale increases in income around the world that have pulled millions of people out of poverty, Deaton details why gaping inequality remains, both between and within nations. That inequality, decades if not centuries in the making, can be understood not only by poring over economic data, but also pairing economic research with health data. For instance, Deaton looks at metrics such as the height of women from many countries over the course of decades as a key marker of economic progress.

The book also explores how global development aid may have exacerbated problems relating to poverty rather than reducing them. Deaton’s book combines respect for the progress made with an open questioning of gaps in the progress and efforts to address those gaps. He gives suggestions on how the global economy can engage those displaced and left behind by reforming incentives to companies and lifting trade restrictions in the developing world.

“Professor Deaton is an outstanding economist whose careful research and empirical methods have informed and challenged our thinking around global health and poverty in low- and middle-income countries. He doesn’t accept easy answers and carefully assesses what works and what doesn’t work,” said WDI President Paul Clyde. “Deaton’s thinking is very relevant to WDI’s mission and we’re honored he can join us for our 25th anniversary event. We’re looking forward to his speech and a lively discussion that will be illuminating for students, faculty, and anyone interested the development of low- and middle-income countries.”