In January, two members of WDI’s new Entrepreneurship Development Center, part of the Institute’s Education Initiative, traveled to Bahrain to work with Tamkeen, a government-affiliated organization in Bahrain tasked with developing the country’s private sector. 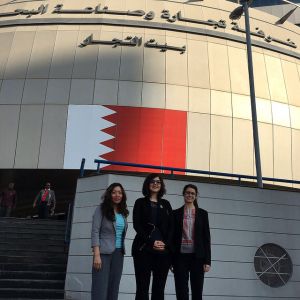 Millie Chu, Diana Paez-Cook and Kristin Babbie stand in front of the Bahrain Chamber of Commerce and Industry Building.

“We collaborated with the team at Tamkeen to put together a results-based monitoring and evaluation framework focused on developing objectives, outcomes, outputs and indicators for their new Entrepreneurship Mentoring program,” said WDI’s Kristin Babbie. “They wanted to be able to articulate the results of the mentoring program on the entrepreneurs who participated and demonstrate its impact.”

Since 2014, WDI, in partnership with the Center for International Private Enterprise (CIPE), has helped develop entrepreneurship training and mentorship programs in Bahrain.

Babbie and WDI’s Diana Paez-Cook spent one week in Bahrain, an island nation in the Persian Gulf. Paez-Cook said WDI also worked with the Entrepreneurship Mentoring team at Tamkeen to ensure it fit their needs.

“They are now able to populate the framework and use it as a management tool for their program, as well as adapt it to their evolving needs,” said Paez-Cook, who also is director of WDI’s Grants Management team.

She and Babbie, who also is a senior project administrator on the Grants Management team, will guide Tamkeen in the M&E process over the first year of the Entrepreneurship Mentor program. The program is scheduled to launch this spring.

“We will provide support when requested in terms of entrepreneurship indicators related to mentoring, as well as guidance in terms of data collection tools and approaches that they might require,” Paez-Cook said.

During their recent trip to Bahrain, Paez-Cook and Babbie also discussed developing a coaching program with Tamkeen’s Coaching Team. While a typical mentoring engagement lasts 9-12 months or longer, a coaching relationship would target a specific problem an entrepreneur has and would end once the problem is resolved.

WDI’s entrepreneurship training, mentorship training and capacity-building work in Bahrain are some of the WDI Education Initiative’s key focus areas, and builds on one of its areas of strength and expertise.

The training materials incorporate leadership, critical thinking, active citizenship, ethics, and decision-making techniques into the existing curricula. It is used in the training of Bahrain’s trainers, and subsequently by the trainers in their entrepreneurship education programs.

Julie Felker, a WDI faculty affiliate, wrote the leadership curriculum. She traveled to Bahrain in late 2014 to hold a workshop for trainers involved in Bahrain’s entrepreneurship initiatives and education programs to implement the training in conjunction with CIPE. Felker’s workshop included discussions on leading practices that were part of the newly developed materials and was tailored to address the needs of the Bahraini trainers.

Building on this collaboration, WDI sent Peter Scott, professor of entrepreneurship at the Whitman School of Management at Syracuse University and author of an entrepreneurial training guide, to Bahrain in March 2015. The guide provides skills, “how to” examples, and resources to teach entrepreneurship and make the process experiential, or real, for the student.

Also in March 2015, WDI Faculty Affiliate Matt Brown traveled to Bahrain to present a comprehensive entrepreneur mentoring guide he developed to help Tamkeen create a program specifically for the country’s entrepreneurs. Two months later, he returned to deliver a two-day “train the trainer” workshop for those interested in mentoring new and existing Bahraini entrepreneurs.

The Bahrain project also builds on WDI’s long track record of providing entrepreneurship education in emerging markets. For example, working with Goldman Sachs’ 10,000 Women project, WDI designed and delivered 12, six-month entrepreneurship programs at the College of Business and Economics at the University of Rwanda in Kigali. In all, more than 300 women graduated from the program, which included modules on “Introduction to Business Strategies,” “Marketing, Negotiations & Customer Care,” “Operating a Business in Rwanda,” “Budgeting & Management Accounting,” “Financial Management & Loans” and “Developing a Successful Business Plan.”

And the U.S. State Department’s Middle East Partnership Initiative awarded WDI a grant to provide training for entrepreneurs from throughout Morocco. The training consisted of sessions in marketing, strategy, accounting, finance and exporting. The grant was renewed the following year based on successful delivery. WDI partnered with Moroccan-based Al-Akhawayn University to offer a total of six training programs in Morocco.