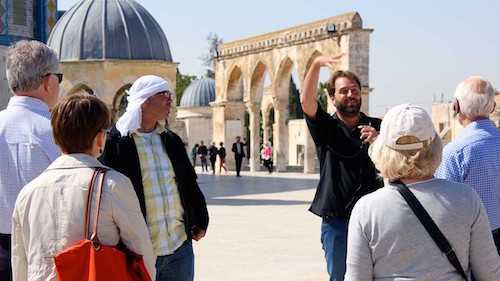 Aziz Abu Sarah, a Palestinian who co-founded a tourism business with an Israeli partner to help break down cultural and historical barriers through travel, will discuss how everyday interactions between people from different cultures are an effective peace-keeping tool. Part of the WDI Global Impact Speaker Series, the talk is at 5 p.m. on Monday, April 10 in Room R1230 at the Ross School of Business, and is free and open to the public.

“Aziz Abu Sarah united his drive for cross-cultural understanding, his passion for peace building and his business acumen to co-found MEJDI Tours,” said Amy Gillett, vice president of WDI’s Education Initiative. “This is an impressive social enterprise that shows us the power of bringing together passions and strengths to make positive change in the world. I know that students will be inspired by his story.”

Abu Sarah’s talk, “Social Entrepreneurship for Cross-Cultural Dialogue,” will explore MEJDI’s socially-responsible business model that honors clients and local communities, and is financially and environmentally sustainable. Sarah, MEJDI’s CEO, believes simply being a tourist is an opportunity to break stereotypes and foster understanding, friendship and peace. MEJDI was established in 2009 and is a a certified B Corp, which harnesses the power of business for social change.

Abu Sarah is a TED Fellow and a National Geographic Explorer, an honor given to people who are pushing the boundaries of knowledge and exploration. He has spoken at countless international organizations and universities, including The United Nations, Nexus, TED, Georgetown, Yale and Harvard. He has published articles in The New York Times, National Geographic, and other publications.

Abu Sarah is the recipient of the Goldberg Prize for Peace in the Middle East, the European Parliament’s Silver Rose Award, the Eisenhower Medallion, and the Eliav-Sartawi Award for his Middle Eastern Journalism. He was named one of the 500 most influential Muslims in the World by the Royal Strategic Centre in Jordan from 2010-2016. He also was recognized by then-United Nations Secretary General Ban Ki Moon for his work in peace building.

Abu Sarah’s popular TED Talk, which has more than 1.2 million views, is below.