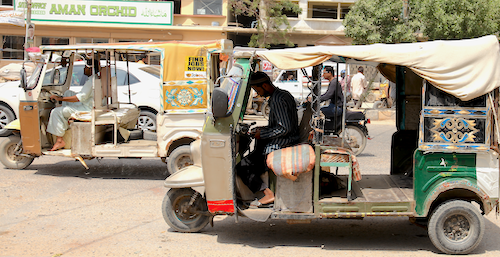 A Roshni Rides driver waits for a customer.

A case study by a Rutgers Business School professor about a start-up enterprise in Pakistan and its quest to be self-sustaining after 12 months has won first place in the WDI 25th Anniversary Case Competition.

“Roshni Rides: Pricing Transportation for the Underserved,” by Can Uslay examined how the enterprise, which provides affordable, dignified transportation to refugees and was awarded the $1 million Hult Prize in 2017, dealt with many challenges as it prepared to launch. For the case, Uslay followed the Roshni Rides team as it tried to find a price point that made it affordable to its customers while also generating enough money to make future expansion possible.

“Roshni Rides wants to restore the dignity of refugees by providing accessible, affordable, and reliable transportation, one ride at a time,” Uslay said. “For me, it was great to be able to create a case study to convey their powerful story which will resonate with more people as a result of this win.” 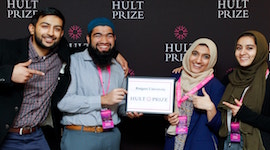 The case competition celebrated and commemorated WDI’s 25th anniversary in 2017 and its long history of developing market-based solutions in low- and middle-income countries around the world. It was open to students and faculty individually or on teams, and had to describe a dilemma or challenge faced by a company or organization related to creating, implementing, evaluating and/or disseminating market-based solutions in developing countries.

“By rolling out this competition globally, we not only invited case study submissions focused on WDI’s mission, but also created awareness of WDI and its 25-year history, ” said Sandy Draheim, manager of WDI’s case publishing and marketing. “Entrants included faculty and/or students from 10 countries representing over 40 different universities.”

The first round of judging was completed by an internal WDI team. However, the final winners were determined by an esteemed group of academic professionals which included Kim Bettcher, director of knowledge management at the Center for International Private Enterprise, and John Branch, Gautam Kaul, and Jordan Siegel, all professors at the University of Michigan’s Ross School of Business.

The second-place winners were Fernando Roxas and Andrea Santiago from the Asian Institute of Management in the Philippines. The pair wrote, “Milking the Future: DVF Dairy Farm Partners with the Filipino Farmer,” that explored whether Filipino farmers would be able to produce sufficient quantity and quality of carabao (water buffalo) milk to satisfy the demands of the DVF Dairy Farm customers.

In third place was “Chanderiyaan: Weaving Digital Empowerment into the Indian Handloom Industry,” by three professors from the FORE School of Management in India. The case, written by Bishakha Majumdar, Sriparna Basu and Shilpi Jain, studied a successful 15-year-old handloom enterprise as its founder considered making it an independent, self-sustaining social enterprise.

Uslay was awarded $3,500 for his first place win and donated the winnings to the “noble mission” of Roshni Rides, he said. The second place team won $2,500 and third place was awarded $1,000. Additionally, each winning case was professionally published by WDI Publishing.

“They have a very moving story,” Uslay said. “Besides the pedagogical value of learning to deal with the real-life problems they are facing, I thought it would be inspirational for students who study this case to see that they too can create something that leads to a grand prize of $1 million and meet former President Bill Clinton at the U.N. in the process. In fact, Rutgers Business School has two teams in the global finals this year so I know I am right about the positive spillover effect of their story.”

Uslay said his case is unique in that it combines essential marketing planning issues with lean startup thinking. It also demonstrates what to do when you have key metrics and formulas but are unsure how to apply them in situations with imperfect information and high uncertainty. For Roshni Rides, Uslay said they could do a SWOT analysis, create a business model canvas and develop a five-year projection but they were doing a start-up in an environment where all the parameters were changing.

He said for his case, classroom discussions can be conducted at a high level or push deep into the details.

“It is a case that begs to be discussed both qualitatively and quantitatively,” Uslay said. “But at the end of the day it is a case of entrepreneurial marketing. How can we serve the underserved? Can we serve them well but profitably? Spoiler alert: yes.”