In a first for WDI, two managers visited Cuba last month to assess how the Institute could assist the country’s burgeoning entrepreneur community.

Amy Gillett, vice president of the Education Initiative, and Diana Paez-Cook, senior program manager of the Grants Management team, were part of a 20-person delegation that traveled to the island nation in May as part of a culture and policy trip organized by the travel company Insider Expeditions. Many on the trip were lawyers, policy development professionals, and lobbyists who hoped to learn more about Cuba’s economic transition.

That transition is slowly developing in the wake of renewed diplomatic ties between Cuba and the United States, and President Barack Obama’s historic trip to Havana in March. While it still operates a largely state-controlled economic system, the Cuban government has begun to make changes by permitting more of its citizens to operate private businesses.

Related news article: No Longer an Island: How Cuba’s Economic Transition May Differ From Soviet Bloc

Over the years, WDI has provided entrepreneurship training in Morocco, Rwanda, and Bahrain, and delivered business education training workshops to thousands of managers in former Soviet bloc countries.

Paez-Cook said the visit she and Gillett made to Cuba was invaluable because of the knowledge gained about the current situation on the ground and the connections made during the visit. She said the pair has a much better understanding of Cuba, which is “its own unique universe.”

While WDI typically works in partnership with local organizations to provide entrepreneurship training and other programs, the current system in Cuba has prevented the development of an organized civil society. A traditional approach of seeking out a partnership with an NGO will therefore not be viable at this time. Instead, Paez-Cook said WDI would need to cultivate relationships with individuals, educational institutions, and other entities to find ways to engage and support the transition.

Another factor on how open Cuba becomes is the outcome of the U.S. presidential elections. The next president will have the opportunity to build on the progress made by the Obama administration and work with the successor to current Cuban president Raul Castro, who plans to step down in 2018.

Paez-Cook said WDI will explore opportunities for engagement over the next few months.

“As economic and policy changes continue in Cuba in the medium- to long-term, entrepreneurship training and technical assistance could go a long way in providing Cuban entrepreneurs with tools and techniques to sustain successful businesses,” she said. “That said, any entrepreneurship program in Cuba would have to be uniquely tailored to the current context and conditions, and leverage the amazing creativity and resourcefulness of the Cuban people. It will be important to work in partnership with Cubans every step of the way to assist with their needs and learn from them as well.” 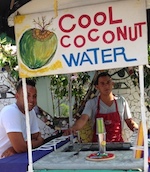 Gillett said she was struck by the entrepreneurial spirit among Cubans, who are very interested in potential economic opportunities. She encountered a man who had a license from the Cuban government to operate a coconut water stand. Since resources are severely limited, the vendor works with what he can find, including the coconuts he harvests from nearby trees.

“After meeting small-scale entrepreneurs and gaining a deeper understanding of the economic situation, we’re in a great position to start developing ways to help entrepreneurs move their businesses to the next level,” she said. “The resourcefulness and can-do spirit of the entrepreneurs we met was truly impressive. We saw many examples of business owners running creative businesses despite the lack of resources and raw materials available on the island.

“I believe that further access to materials and to business training would provide a huge lift to entrepreneurs in Cuba and a much needed stimulus to the Cuban economy.”